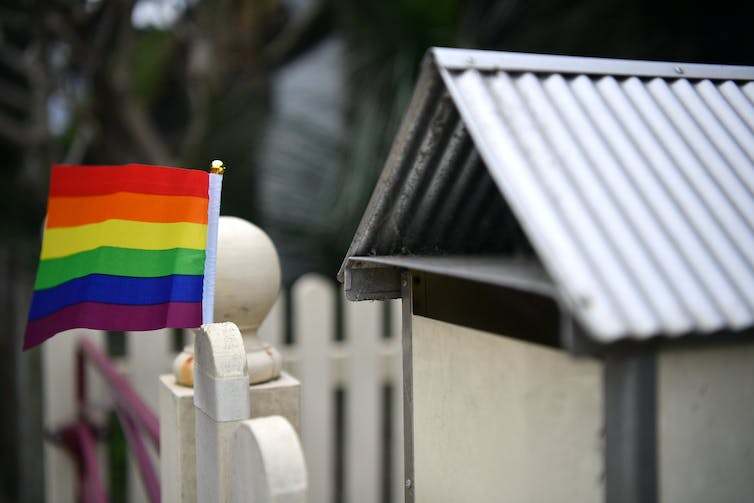 Almost two years after the heated discussions accompanying the 2017 marriage equality postal survey, LGB Australians remain at the centre of public debates. For example, there are ongoing issues around religious freedoms, and homosexuality was at the centre of Israel Folau’s controversial statements.

But one aspect about the Australian LGB populations that is often ignored is who, and how many, belong to them.

In fact, there is a large degree of uncertainty internationally about the share of the non-heterosexual population. The accuracy of early US studies by Alfred Kinsey has been largely discredited. More recent work by demographer Gary Gates provided more robust information, but left many questions unanswered.

Read more:
Marriage equality was momentous, but there is still much to do to progress LGBTI+ rights in Australia


In Australia, there is comparatively less information – notwithstanding recent research efforts. Understanding the prevalence of non-heterosexuality — as well as how this varies according to who, what and when we ask — is an important endeavour.

It can contribute to more inclusive social policies and services. It also allows us to reflect critically on traditional narratives about sexual orientation and their applicability to current debates within Australian society.

Here, we collate and discuss estimates of the prevalence of sexual-minority status in contemporary Australia, leveraging recent information from several major social and health surveys.

Dimensions of sexual orientation: what you ask

Few Australian studies collect information on the three domains of sexual orientation from the same sample. But those that do provide an interesting picture: the prevalence of non-heterosexuality varies drastically depending on the domain asked about.

Take, for example, the Australian Longitudinal Study on Women’s Health, a long-running health survey tracking several cohorts of women over time. Its youngest cohort, comprising roughly 17,000 women, was asked about sexual orientation at ages 22-28 years in 2017. When sexual-minority status was defined on the basis of identity, 38% of these young women fell into a category other than “exclusively heterosexual” (that is, “mostly heterosexual”, “bisexual”, “mostly lesbian” or “lesbian”).

If sexual-minority status was defined using same-sex sexual behaviour (having had sex with other women at some point of their lives), about a third (32.9%) of the young women in the study would fall into this group. Yet only 3.7% of them reported that their sexual experiences with women were at least as frequent as those with men.

Finally, 43.5% of women in this sample acknowledged feeling some sexual attraction to other women. But again, a more conservative measure — feeling as intense a sexual attraction for women as for men — reduces this statistic to 1 in 10 (9.9%).

Interestingly, the degree of overlap between measures is not as large as could be expected. While 52.9% of the young women reported some non-heterosexuality on at least one dimension (identity, attraction or behaviour), only 23.4% did on all three dimensions.

Gender differences: who you ask

Some surveys ask sexual-orientation questions of both men and women, which allows comparisons by gender.

However, these figures are likely to be underestimated, as 6.1% of women and 4.8% of men chose uninformative response options – “other”, “don’t know”, and “prefer not to say” — which suggests that many of them may not be heterosexual.

Estimates of non-heterosexuality from the 2014 General Social Survey for the Australian population aged 18 years and older are slightly lower, at 2.5% for women and 2.4% for men.

The Longitudinal Study of Australian Children asked a sexual-attraction question to a sample of about 3,500 boys and girls aged 14-15 years in 2014. In this youth sample, 1.2% of girls reported feeling sexually attracted to other girls exclusively, 4.4% feeling attracted to both boys and girls, and 4.4% being “unsure” about their attractions.

Among boys, 0.4% reported feeling sexually attracted only to other boys and 2% to both boys and girls, while 1.7% were “unsure”. Therefore, as for the adult population, more adolescent girls than boys fell into the combined sexual-minority category — 1 in 18 (5.6%) compared with 1 in 42 (2.4%), excluding the “unsure” group.

Sexual fluidity: when you ask

This phenomenon of sexual fluidity gives rise to other fascinating statistical patterns surrounding the prevalence of non-heterosexuality. For example, our recent research demonstrates that women’s sexual orientation should not be assumed to be static.

Rather, some women experience shifts in their sexual orientation over time, responding to changes in their personal and social circumstances. Thus, the prevalence of non-heterosexuality also varies as a function of age and life-course stage.

We used Australian Longitudinal Study on Women’s Health data to track a cohort of women born between 1973 and 1978 from ages 22 to 27 years in 2000 to ages 34 to 39 in 2012. Approximately one in eight (12.5%) changed their response to the sexual-identity question on at least one occasion. The most common changes involved movements from “exclusively heterosexual” to “mainly heterosexual”, and vice versa.

However, the results were very different when we repeated this exercise using data from a younger cohort of women, born between 1989 and 1995 and followed from ages 18 to 23 years in 2013 to ages 22 to 28 years in 2017. Approximately one in three (32.8%) of these young women changed their response to the sexual-identity question at least once. The most common changes involved moving away from the “exclusively heterosexual” and “mainly heterosexual” categories.

Less is known about change over the time in the number and share of Australians who are non-heterosexual. This is because most data collections only began asking about sexual orientation in recent years.

Estimates based on the 2001/2002 and 2012/2013 instalments of the Australian Study of Health and Relationships (each canvassing about 20,000 men and women age 16-59), suggest an increase in the prevalence of non-heterosexuality across different measures.

The share of men identifying as homosexual or bisexual went up from 2.5% to 3.2%. The share of women identifying as lesbian or bisexual also rose, from 2.2% to 3.8%. While the share of men expressing some same-sex sexual attraction increased slightly (6.8% and 7.4%), this increased more markedly for women (12.9% and 16%). Similarly, the prevalence of lifetime same-sex sexual experience increased for both sexes, with the increment being more pronounced among women (8.5% to 14.7%) than men (6% to 6.6%).

What does it all mean?

The variability in estimates of sexual-minority status according to who, what or when you ask might come as a surprise to many. It also casts doubts over traditional “us and them” narratives about sexual orientation.

Using certain definitions, Australian sexual minorities appear in fact pretty “major”. While only one in 25 Australians identify as gay, lesbian or bisexual, feeling some attraction to members of the same sex or seeing oneself as “mainly heterosexual” is fairly common—especially among women.

Read more:
Australia has finally achieved marriage equality, but there’s a lot more to be done on LGBTI rights

More broadly, the nuances here serve as an important remainder of the complexity of human sexuality. Large-scale quantitative studies have only scratched the surface. More information on, for example, less socially salient but clearly emerging sexual-orientation and gender-identity groups (for example, asexual, pansexual, demisexual, transcurious, and bigender) is needed to fully map gender and sexuality in our society.

Then we can better understand how these personal traits contribute to shaping the lives of everyday Australians.